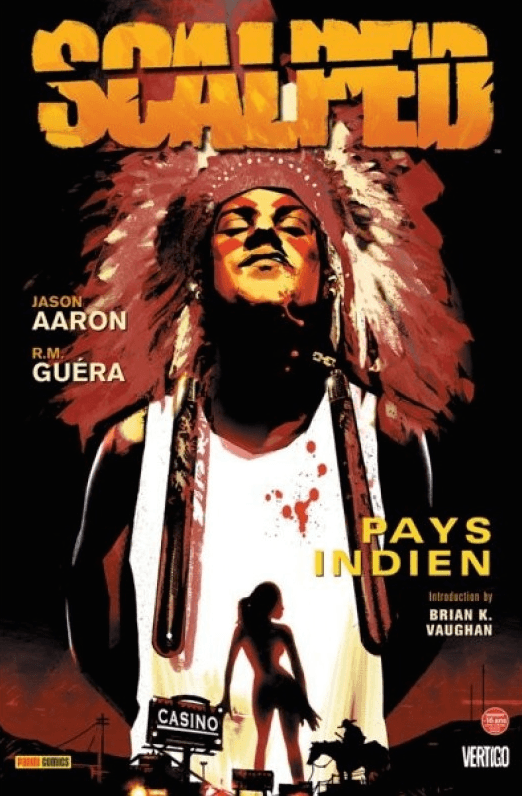 Adrien Vinay : Hello Mr. Guéra, I’m here to talk about creation in designing comic books. So, can you tell me about your work ? Specifically, how did you became a comic’s creator ?

R. M. Guéra : Basically, it’s the need, to express myself. So it’s the same thing as a painter, as a romancer, you have the need. In the court of this need, as I discover, are not even feelings, I think it’s the story, I think it’s close to poetry. Story about somebody… Someone with a story behind… How was it to be this person in those circumstances ? This is what seize me most… So, being close to story, to make her right, I discovered with time that is really close to poetry: we have to reduce somebody’s situation, or life, or important moment, to a panel or two, on page. This is a nice challenge. And the point is not to illustrate, the point is to express. So I try to illustrate, I do technical stuff because I know how to do it… What I really want is to express, to justify, emotionally, the script: this is the all aim! And if I look at a good comic, I don’t look if the drawing is good, I don’t look if the dialogues are good, I look if they are together: if the script and the drawing are together. This is quality for me, this is the main thing for me, the most important thing for me. If they work together, this is good. Because we read about the story, we don’t read about the drawing, we don’t read about the dialogue. We read about that, about this people there! So this is what inspired me most, this is what I try to mingle my talent in.

Technically, how do you build an album ? Do you have some steps in your construction work ?

Yes, I have so many years in storyboards and comics, and you know all this things, in painting also, in designing. So the main thing is your opinion about somebody. In Scalped for example, when I talk to Jason about the characters, we were discussing if Red Crow knows his Bad Horse dad… Maybe he doesn’t know ! This is what inspires you. Or, the best thing ever said about Carol, Jason says  »making a girl that everybody wants to fuck, but nobody wants to marry » and this is what makes something become alive. He’s not saying “make her bigger breasts” because I knew she should have one. By nature I knew the whole thing, the whole plan of it. It’s very sexy when you make those things exaggerated here and there…

Is it again about the combination of dialogues and illustration ?

Yes, I have to express this stuff, not just illustrate this stuff… It need to be justified, it just need to be accepted by the reader, so this is my work. And you know, I have a colorist, Giulia Brusco, she’s the third one in the roam, so she has to justify my black-and-with page to make it more together, that was the all thing we work on, this is our aim. To make good story, to make the combination matters, not more.

According to you, generally, are comic books difficult to read ?

I think it’s incredibly powerful medium, and I think the time for comics is coming because with all this technical advance with computers and things… I think we’re very close to time where the grace is what matters, not technical advancing. It’s not how graceful the comic is, aesthetically or whatever… If I do water-colors now, and I don’t want to use computers, it’s because the grace of imperfections it makes is nice for me. In using computers, you can reach everything, it’s so advanced… You know, the computer is better than me, but computers doesn’t have a grace, I have a grace. So if I give grace to my drawings they’re gonna have it. And I’m trying to prove it to younger artists, to my colleagues, that the point is grace, not technical perfection.

And your comic books, are they difficult to read ?

Maybe I would never know… It’s really difficult for me to look at my pages, because I will take them and recomposed them again… There is a joke in Vertigo, with Scalped’s editor, Will Denis, he said : “If I let you, you will be still doing the first issue”. Because there is always something to make better! So you have to use common sense, you have to use technical part of it, you have to be aware of the readers, so, in fact, if you ask me about my pages, I know they’re good because I am their artist, but I don’t know how much, I’m not sure… Because I’m from behind the curtain, I’m not in front of the curtain. It’s make it difficult for me to know exactly what makes my work good or bad, or whatever…

What are your influences ?

Uh, I have a lots! A books painter, old guy, Frank Robbins1, Jijé2, Franquin3… Maybe he’s the best, I don’t know, because art it’s not about being the best, but what he inspired at least at me it’s just absolutely incriminant. But my many influences when I was a kid is Joel Gutini (?), a very unknown guy, he’s Brazilian actually… And then, after reading his books, I read a mixture of Jack Davis4, Wallace Wood5, with Jijé, Giraud6 and Franquin. I like books, I like movies, I like poetry, music, all this things, I like photography, Cartier-Bresson7 is the best comic books artist in the world! (he laughs) Because it’s just incredible what he does with click you know. I like art, I like expressing, I like poetry, I don’t know… William Blake8 or philosophy…

We will never reach him, he’s too far…

I don’t mean in a bad way! He is maybe the best artist of the twentieth century at least. Because he went so far away, he opens so many doors for all of us, there is no other Mœbius, it just happen once in the History. If you ask me the strength of Giraud, I can compare with Karabatic9 (he laughs), something like that… Because he opens so many doors, nobody did this! He didn’t open two or three, he opens fifteen. And just when I’m looking at him, I aware of all this doors! Will I open them myself ? This is another question! But the impact he did for us, the good will he put in, the same for investigation, for the graphic, for the violence… Nobody did anything similar! We have to wait a long time before somebody else with that strength up here. It’s just almost impossible… He’s just you know…

Yes, but more than the top, there is no criterial for him, he’s over the top. I miss him a lot, I didn’t know I’m gonna miss him… Everybody knows he’s gonna die one day, but I really miss him a lot, just thinking about him… What is gonna do next month ? He was a great light.

I think the most important thing is that comics must stay good, we must make good comics. And they will find call of people to be there audience or readers. The most important thing is to not make bad comics, just make the best you can. It’s one of the most powerful medium we have at all… Because, I’m an actor, I’m a director, I’m a photographer, I’m everything! I can do theatre, I can do poetry, I can do graphics, I can do minimalists, I can do anything! As I said when your profession becomes as good as your hobby, it’s primitive! Because it’s the most interesting thing I can do. I sincerely think that future should be owned by comic books, maybe it will, maybe it won’t, but it should. Because it’s a very powerful medium and people are becoming aware of things, with computers, informations and things, people are becoming aware, they’re becoming better with all this things. I’m not playing in a court, but technically speaking. So comic could be the future, of everything, really. You can do so much in comic, I hope the best has to come…

What is the place of comic books in art schools ?

What do you think about archiving comic strips ?

It depend on artist! The main thing is to keep everything to the moment you’re in. When I work, the most important thing is not the drawings, the most important thing is to take out of me as much as I can. As I told you, it’s not about illustrating, it’s about expressing, it’s very different. I want to know about a comic books artist or writer, what do they express in their work, not what do they illustrate. The point is that line is your feeling, line is you, you are the line, so take it up! Make it live, make it be something else.

Do you know digital publication ? If so, which one ?

Yes… Django11 actually… I’m very absent, I have so much work, I don’t read that much, I read books a lot… I don’t have time, it’s really difficult for me, I have my heroes, I have so many things to do !